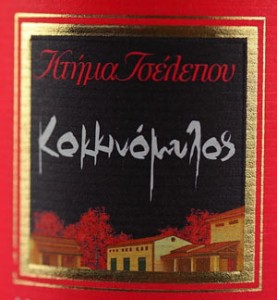 Our Greek patrons have suggested for years that we host a Greek wine dinner. To which I have said, “when the time is right.” We feel the time is right with the wines of Ktima Tselepos. This winery exceeds both with international varietals and indigenous Greek varietals and this is why we feel compelled to throw a party.

Tselepos Estate is a small family business. Is was founded in 1989 by Yiannis and Amalia Tselepos, who planted the first cabernet sauvignon and merlot vines on the foothills of Mt. Parnon, 14km from the town of Tripolis near the ancient city of Tegea, in the heart of Arcadia.

The region was originally selected because of its perfect terroir: clay-rocky soil and cool-climate viticultural conditions which we consider essential for the production of fine wines in Greece ́s hot, Mediterranean climate.

A roulade of lamb stuffed with a lamb forcemeat flavored with Moroccan spices wrapped in cull fat seared and roasted served over stewed ratatouille.

$85 per person Tax & Gratuity not included