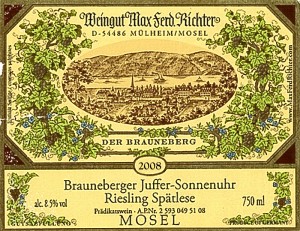 Please join us Thursday September 8, 2011 as we welcome back Dr. Dirk Richter to Chez François. We will showcase eleven Rieslings from this award winning winery, focusing on different styles and terroirs of this terrific variety. Chef Join D’Amico has created a six-course dinner to compliment these wines.

The estate of MAX FERD.RICHTER has been in the ownership of the family for more than 300 years! Today this enterprise is one of the leading producers of top RIESLING-wines in the heart of the central Mosel area with total holdings of 40 acres and an annual production of about 10,500 cases.

MAX FERD.RICHTER not only produces fine RIESLING-wines which are well known throughout the world, such as “Wehlener Sonnenuhr”, “Graacher Himmelreich” and “Brauneberger Juffer”, but also two Monopoly top quality wines: “Mülheimer Helenenkloster” and “Veldenzer Elisenberg”. The possession of these vineyards dates from 1813 when one of the ancestors, by his personal courage, succeeded in preventing the plundering of Mülheim by Emperor Napoleon I.

“The Mosel region is dominated by Riesling grapes and slate soils, and the best wines are grown in dramatic-looking steep vineyards directly overlooking the rivers. This region produces wine that is light in body, crisp, of high acidity and with pronounced mineral character. “

A spicy-hot tuna tartar served in a potato crisp and smoked salmon topped with crème fraîche and caviar on toasted brioche.

A flaky tart filled with an egg custard flavored with Gruyère cheese, applewood smoked bacon and leeks, topped with a classic hollandaise sauce.