“Finesse to most Americans means light… But it doesn’t mean that in France. It means harmony, balance, completeness.” 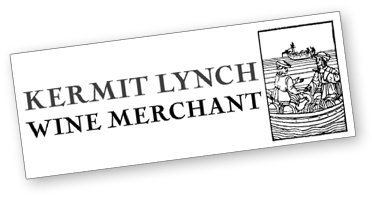 Join us Thursday March 24, 2011 as we feature the wines of Kermit Lynch Imports. We will feature twelve wines from eight regions throughout France. Chef John D’Amcio will feature a six-course dinner to match these terrific wines.

Kermit Lynch was born and raised in California. From his youth he remembers that his father and uncle worked for a winery, but he has no memory of anyone in his family drinking wine. The Lynch family was rich in preachers, too, but at communion they served Welch’s grape juice, even though, as Kermit points out, Jesus turned water into wine, not into grape juice. In 1972 he opened a retail wine shop and later began importing and distributing nationally.

Prior to 1972, only large importing houses were importing French wines to the United States. The small wineries were left with selling their wines in France or selling there grapes to large Negotiates. There were very few importers of small, hand-crafted, family owned wineries in France. Kermit really opened the door for this type of importing and many of the leading boutique importers today worked for Kermit Lynch.

In 2000 he was named Wine Professional of the Year by the James Beard Foundation, in 1998 the French government presented him a medal and named him Chevalier de l’Ordre de Mérite Agricole, and in 2005 he received the Chevalier de la Légion d’Honneur. His book Adventures on the Wine Route, won the Veuve Clicquot Wine Book of the Year award.

A combination of rabbit and duck served with stewed root vegetables and cannellini beans in a rich veal and vegetable broth with toasted crackling brioche.

$95 per person Tax & Gratuity not included